Las Vegas, NV, (October 23, 2018) – A Bronco is known for its toughness. So too is the pro MMA fighter who bears the same name (only with a different spelling, of course.)

Steubenville, OH native, Branko Busick (3-1-0), displayed his toughness at “FFC 32” by knocking out previously unbeaten Light Heavyweight, Ivan Erslan (6-1-0), at the 4:41 mark of the second round.

Busick landed a solid left directly to the chin of Erslan, that not only shook Erslan to the core, it also sent shockwaves into the fans sitting inside of Fight Dome Las Vegas. It was certainly an upset, albeit a mild one, but an upset nevertheless.

“I’m thankful because Ivan was such a tough opponent,” said Busick. “That is what I do this for, to compete against people like him, to test myself.”

The former West Virginia University Linebacker passed the test with flying colors as he gained the respect of fellow peers and increased his stock (as the old saying goes) in the world of mixed martial arts.

Busick, the son of former WWF/WWE professional wrestler, Nick “Big Bully” Busick, felt the power of Erslan right away and Busick knew that he had to match Erslan’s intensity or it may have been a very different result at FFC 32. 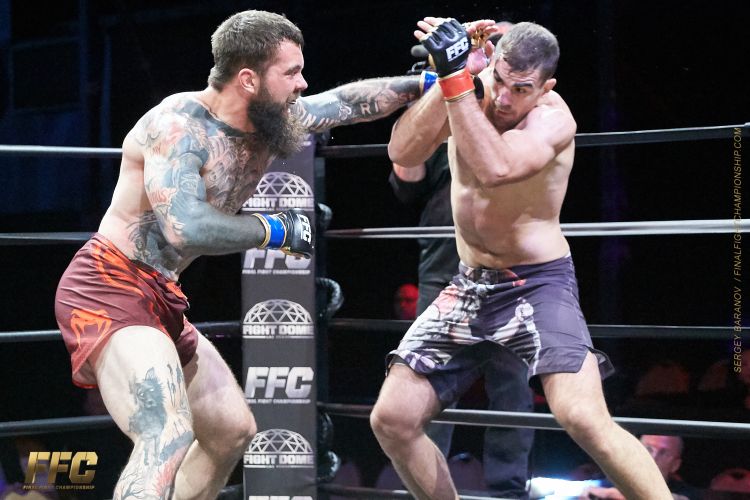 “He (Erslan) pushed the pace very early on in the fight,” said Busick. “It was very tough, I had to go for a gut check and pull it out.”

Busick’s knockout victory aired nationwide on CBS Sports Network and it provided the former NCAA football player with a tremendous sense of pride and accomplishment. As a result, Busick’s FFC Fight Dome experience was unforgettable and following his win, Busick shared his thoughts on Final Fight Championship.

“I loved it, this whole experience has been amazing,” said Busick. “Every person from the top to the bottom at FFC, I love everything about them and I would love to have future in the FFC.”