“The Albanian Warrior” is ready for battle in Las Vegas Las Vegas, NV (Sept. 28, 2018) – To say that Veseli has a wealth of experience would in fact be an understatement. “The Albanian Warrior” has fought a total of 103 fights times in his young career.

In case you didn’t know, Veseli is only 25 years old. Let’s put it this way, his kickboxing resume would not be able to fit on one single page. Not even close.

Veseli is a former WKU, WFC and WMAC World Champion and if there is one thing you won’t see him doing anytime soon – it’s turning down a fight. He’s a fighter’s fighter, as the saying goes, and Veseli prides himself on staying ready.

“I always work mentally and physically on my preparation”, said Veseli. “I am always prepared.”

Veseli has fought under the FFC banner a total of six times, racking up five wins. His FFC 31 opponent, Ambang, is a veteran of Glory kickboxing and was the Road to Glory 2013 Welterweight Tournament Winner. Both fighters have similar styles, refusing to backpedal during their bouts, and always looking for the Knockout.

The Albanian Warrior makes it a habit to never underestimate his opponents but, given his vast experience, he certainly likes his chances.

“I’ve had experience against the best in the world and I have knocked out fighters who have already fought in Glory and UFC”, said Veseli. “I show no fear to Francois Ambang and I will not let him take my gold.” 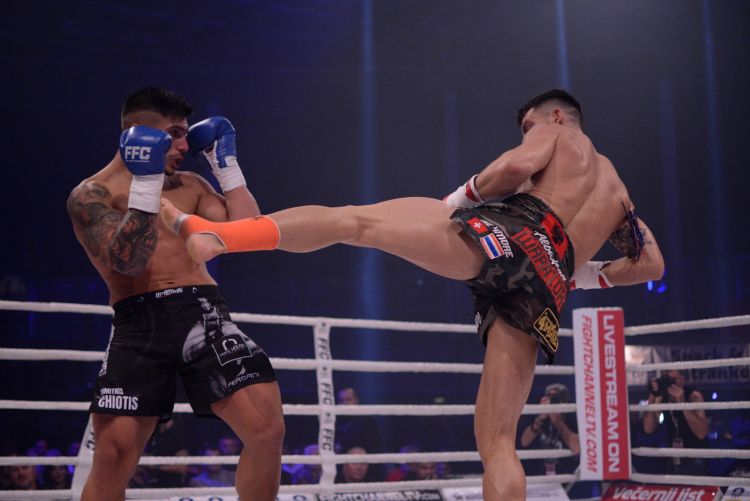 When you speak to Veseli, it is easy to see where the confidence is coming from. After all, you can’t win 83 fights without doing a descent amount of homework on each of your opponents.

“Ambang is a very strong and tough fighter who likes to move forward and push”, said Veseli. “He makes typical combinations and likes to end with a kick and I will not let him play his game.”

Veseli’s only loss in the FFC came in a title fight against Eyevan Danenberg, who happens to be a Glory contender at the moment. As the old saying goes, you learn more from a loss than you do from a win, and Veseli claims that he learned two things from his fight with Danenberg.

“The things I took from that fight were not having to fight sick anymore, and the other was not allowing my opponent to work too hard on me.”

Veseli is excited about fighting in front of a new audience in the fight capital of the world, Las Vegas.

“I know that I have the potential to prove myself in America”, said Veseli. “When I enter the ring on Oct. 12, I will show that I am the complete package.”